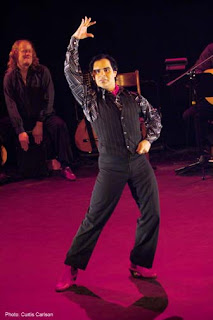 PEDRO AURELIO is the founder and Artistic Director of Bolero Dance Theatre. He started his ballet and Spanish dance training in Puerto Rico, continuing in St. Petersburg, Russia and Washington, D.C. He performed with the Spanish Dance Society in such venues as the Kennedy Center and the Museum of Natural History in New York. He trained in the Royal Winnipeg Ballet's Professional Division, where he received the Paddy Stone Choreographic Award in 1994 and the Doreen McDonald Award for costume design in 1997. His performance credits with the RWB include Don Quixote, The Sleeping Beauty, Giselle, Swan Lake, and Romeo and Juliet.


Pedro Aurelio has continued his Spanish dance training  through annual trips to Spain where he has studied escuela bolera, classical Spanish, and flamenco with Beatriz Barcelo, Pilar Azorin, Carlos Vilan, Pepa Molina,  Manolete, Javier Palacios, and David Sanchez. Over the years, he has worked closely with master teacher Eloy Pericet in Spain to learn the full repertoire of historical bolero dances. In 2011, he received grants from the Manitoba Arts Council and the Winnipeg Arts Council to further his studies of escuela bolera with Mr. Pericet. 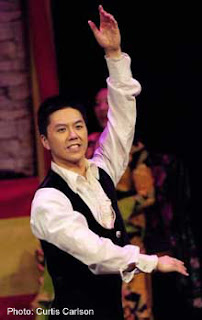 As Artistic Director of BDT, Pedro Aurelio choreographs works for the company and designs both costumes and sets. In 2002 and again in 2011, he choreographed and danced works for BDT with the Winnipeg Symphony Orchestra. He has taught and choreographed for the RWB School, Rusalka Dance Ensemble, Prairie Theatre Exchange, Bravado Dance Studio, the Spanish Club of Winnipeg, Winnipeg Dance Force, Okanagan Summer Dance Institute, and Alaska's Anchorage Ballet Academy. He holds a B.A. in theatre design and a B.Ed. from the University of Winnipeg.


HOWARD CHAN is the Music Director of Bolero Dance Theatre. He started his keyboard lessons at Yamaha Music Centre, and later studied at the University of Manitoba, graduating with a Bachelor of Music (piano) and Education. He is an experienced ballet accompanist, playing for classes and exams at the Royal Winnipeg Ballet and several other dance schools. He is an elementary music teacher in the River East Transcona School Division.
Home
Pedro Aurelio, Artistic Director
Winnipeg, Manitoba, Canada
204.229.5510
e-mail